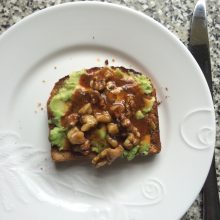 The scientists who advise the UK government on what we should all be eating to maintain good health have concluded that we are not eating enough fibre. According to official figures men need to increase their fibre consumption by 50% and women by a staggering 75%. The recommended amount of fibre we should be eating every day is 30g.

But lucky for us many fibre-rich foods are delicious. Take avo on toast. Two slices of seeded wholemeal bread can have around 11g of fibre, half an avocado has 7g fibre. Make a salsa with a handful of walnuts adds another 2g of fibre.

With a bit of clever product swapping, and fibre-adding you’re looking at 20g of fibre in a single serving of avo on toast, that’s two-thirds of your recommended target right there!  Here’s the recipe.