This page aims to tell you how flour is made. Flour is a natural product made by milling grains, usually wheat, to release the flour that sits inside.

Like most natural plants and fruits, grains, including wheat grains, consist of three main components. Think of an avocado. Firstly there’s the protective outer layer – the skin –  which in wheat is called bran. Then there’s the seed from which the new plant grows. In the avocado this is the big stone, and in the wheat seed it is called wheat germ.  Finally, there’s the main food source – in the avocado it’s the green flesh and in the wheat seed it’s the starchy endosperm. The endosperm is essentially just white flour sitting inside a wheat seed waiting to be removed.

Grains have been ground to make flour since the Roman times – from 6000BC onwards. Grains were toasted to remove the chaff from the wheat and then smashed between two stones. The resultant flour was coarse and grainy. Evidence of sifting has been found so we know that even then, people were making fine, soft flour.

It is this the millers’ job to separate the wheat seed into its component parts: bran, wheat germ and pure white flour. In the UK and EU it is illegal to bleach flour, so the whiteness you see is totally natural. Flour is bleached in other parts of the world, so you might see recipes that call for “unbleached” flour.

Modern millers do not just grind grain the way the Romans did. This doesn’t allow for much of the white flour to be separated from the bran and germ. Instead a system of machines are used to open the individual grains, and then scrape and separate and grind each component. This continues until all the components are finely ground and completely separated. The wheat could go through the machines up to 16 times.

White flour is made using just the endosperm, which is about 75% of the grain. Wholemeal or wholegrain flour, as the name suggests, uses all of the grain. And brown flour uses around 85% of the grain. See here for more information on some of the different types of flour available.

This short video is designed to show the transformation of the wheat seed into flour and also the relevant machinery within a modern flour mill.

How flour is made: in detail

Not all flour is equal. Just as there are different varieties of apples or potatoes, each variety has unique properties and characteristics. These make it more or less suitable for certain products. So some flours are best for making light, airy breads; others for making cakes or biscuits; and others still for making pizza.

So farmers grow different varieties of wheat that will produce flour with different properties so that the baker can purchase the most suitable flour for the products their customers want to buy.

Delivery and storage of grain

When wheat arrives at the mill, it is tested to make sure that it has the required specification to make the right flour for the baker – or other customers’ – needs. It is tested against a contract specification for variety, moisture content, specific weight, impurities, enzyme activity associated with sprouting, protein content and quality. It passes through a preliminary cleaning process to remove coarse impurities, such as nails and stones, and may be dried before being stored in silos according to quality.

The ‘Hagberg Falling Number’ measures the time, in seconds, a plunger takes to descend through a heated mixture of ground grain and water. The test indicates the alpha-amylase activity in the grain. This natural enzyme converts starch to smaller sugar units that would be used by the seed to fuel its growth.

If there is little enzyme activity, the mixture will remain viscous. The plunger will take a long time to descend and a high Hagberg Falling Number will be recorded. Too much enzyme activity and the reverse will be true. High enzyme activity impairs bread quality, producing a very weak and sticky crumb mixture.

When wheat is drawn from the silos prior to milling, it is thoroughly cleaned. Powerful magnets extract any remaining ferrous metal objects.

The wheat is then conditioned to a suitable moisture content by tempering it with water and leaving it in conditioning bins for up to 24 hours. This conditioning softens the bran and enhances the release of the inner white endosperm during milling.

Cleaned and conditioned wheat is then blended in a process known as gristing. This combines different wheats to produce a mix capable of making the required quality of flour to suit the needs of the flour millers’ customers.

The grist is passed through a series of ‘break’ rolls rotating at different speeds. These rolls do not crush the wheat but split it open, separating the white, inner portion from the outer skins.

The various fragments of wheat grain are separated by a complex arrangement of sieves. White endosperm particles, known as semolina, are channelled into a series of smooth ‘reduction’ rolls for final milling into white flour.

Bran and wheatgerm are streamed into this flour to make brown or wholemeal flour. Wholemeal flour contains all the parts of the grain (endosperm, germ and bran); brown flour will contain less bran and may or may not include wheat germ. 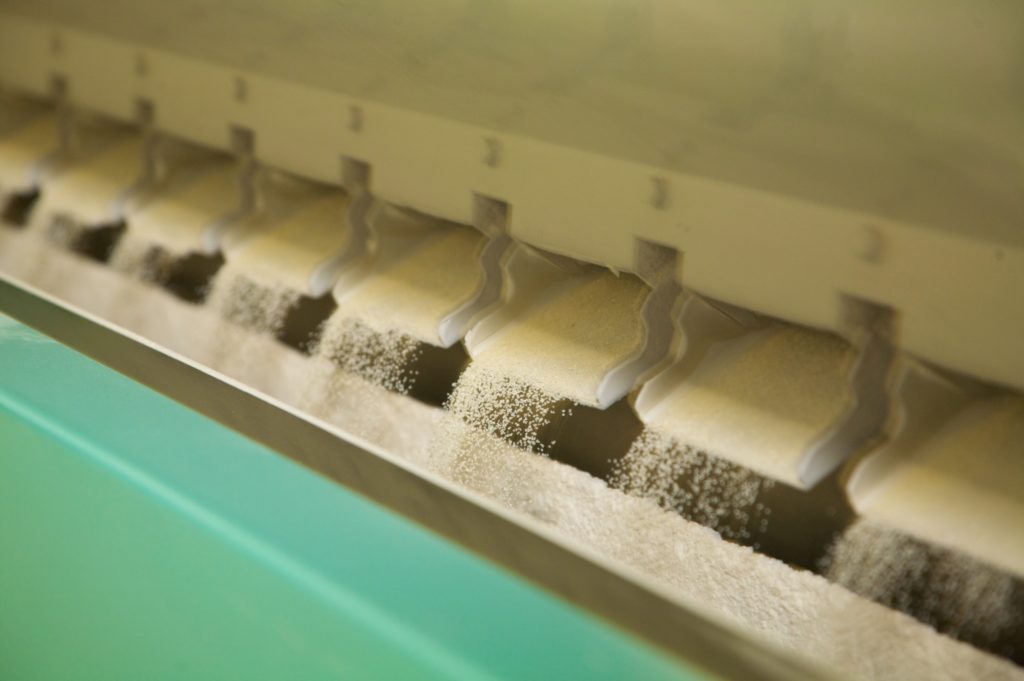 The nutrients calcium, iron and the B vitamins (niacin and thiamin), which are legally required in all white and brown flours, are also added. (Wholemeal flour already contains these nutrients, although it is lower in calcium.) In October 2018 the UK government announced a plan to consult on whether to fortify flour with folic acid to help reduce the number of birth defects.  The consultation is due to take place in early 2019. See here for more information on folic acid fortification.

Most of the flour milled in the UK goes on to make bread. Flour that is used to make bread has the highest protein content so that during the breadmaking process the bread will rise.

Plain flour is best suited for making biscuits, scones and sauces. In the USA, plain flour is called all-purpose flour.

Baking powder (raising agent) will be added to make self-raising flour at this stage.

The whitest flours are produced from the early reduction rolls, with the flour getting less white on later rolls as the proportion of bran particles increases. White flour produced in the UK and elsewhere in Europe is not bleached. This was sometimes done in the past but the process was phased out in the early 1990s, though it does still take place in other parts of the world, for example in North America.  See here for more information on types of flour.

In a typical mill, there may be up to four break rolls and 12 reduction rolls, leading to 16 flour streams, a bran stream, a germ stream and a bran/flour/germ wheat feed stream.

Finally, the flour is sifted before being automatically packed into bags ready for delivery to shops or supermarkets.

Bran and wheat feed left over from producing flours is used in breakfast cereals or animal feed.

In times gone by flour was made by grinding wheat between two stones – one static and the other turning. This simple process crushes the wheat and mixes all the component parts together. This crushing method makes it difficult to separate the white flour. Roller mills shear the grain open which makes it easier to scrape the endosperm away from the wheat bran and wheat germ to produce white flour.

A small amount of the flour produced today is via the stoneground method (less than 1% of total production). The nutritional value of flour is determined by whether it is white, wholemeal or brown and is not affected by the method of milling.  Stoneground and roller milled flour are equally nutritious.