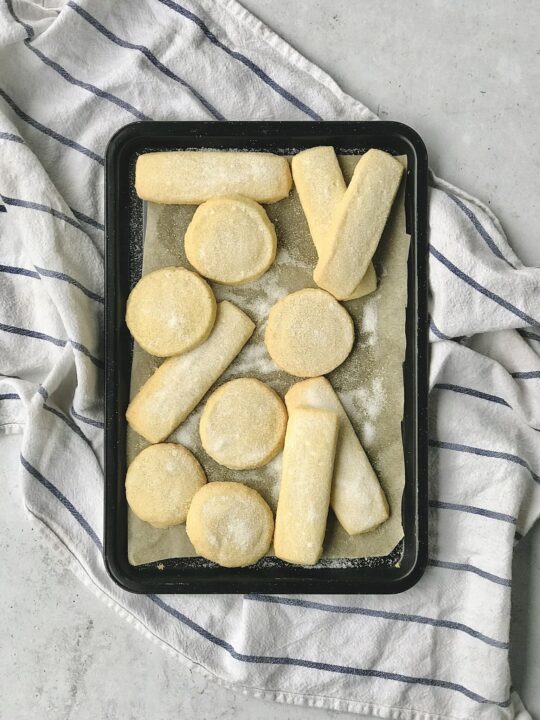 Tip: If you don’t have cornflour, you can leave it out and make a large shortbread instead. For this, use a total of 150g of plain flour instead of 125g. The cornflour is only used to stop the biscuits spreading in the oven!

Preheat the oven to 180°C In the mixing bowl, cream together the butter and sugar with the electric hand whisk

Add the flour and cornflour and continue to mix with the electric hand whisk until a crumb consistency is achieved, then bring the dough together by hand into a ball

Turn the dough out onto a sheet of cling film and form into a log (around 16cm long). Roll it up in the cling film and place in the freezer for at least 15 minutes

Once chilled, remove the cling film and cut the roll into 1cm thick discs and place on the baking tray, allowing space to spread slightly Alternatively you can cut the log in half, in half again, in half again and in half again to make 16 biscuits

Bake for 15 minutes, sprinkling with caster sugar as soon as the biscuits come out of the oven. Allow them to cool completely on the tray before serving

Do you have a Fab Recipe?

The join in the fun and share your wonderous flour-based creations with us. Your recipes needn't be the most elaborate but it helps if it is interesting, simple and quick to make. And naturally very tasty. Once your recipe is approved, we'll publish it here on Fab Recipes and we'll tweet it for you as well, three times. So go ahead and send us your recipe.